Why That Single Camera Angle Doesn't Work for VAR

To start, lets recall the two major elements to offside.
1: Where players were in relation to the offside line at the moment the ball was played by a teammate.
2: If the player became involved in play. In this case the player does shoot the ball, so we know that condition is met.

This moment from the video stream is as close as we can get to the actual moment the ball is kicked, it's currently blocked from view by the white player (1). With higher quality tools and feeds I might be able to get it closer, but this is what we'll have to work with. So, given this is the information we have available, make your decision and where is the offside line?

But, what we need to do is consider the location of the camera, the distortion of this angle, and even the lens and zoom being used. To do this we actually need to draw lines out from the actual field to find a center. 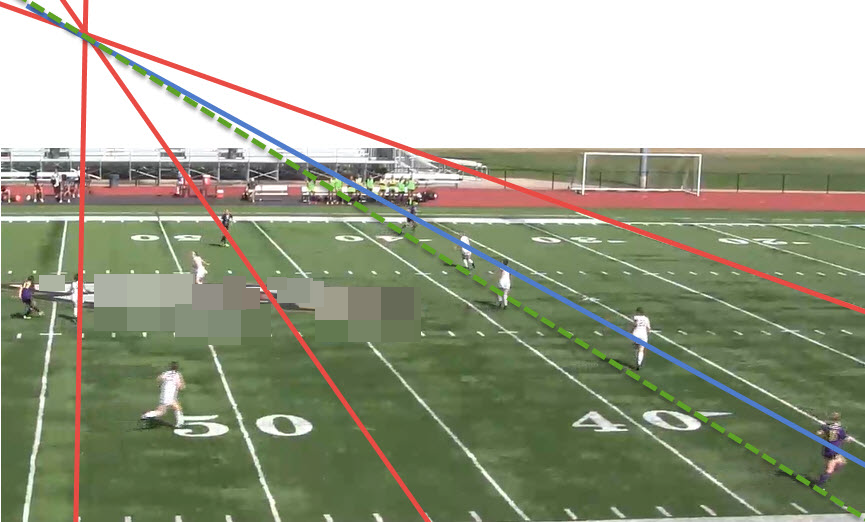 To accomplish this, I first drew my three red lines simply to orient the graphic. Because this is on a multisport field I utilized the hashmarks used by American Football. Even looking at the 41yd marker on the left of the screen you can already see the distortion from the 40yd line.

Without these markers I may need to rely on the Goal Area, Penalty Area, and Goal Line markings. This particular field has a burgundy which are not as visible and even hard to spot at times while on the field.

So now I've got an apex in the photo from these three lines. At this point forward every line I draw will cross through this point.

So the next line I drew was the dotted green. I did cheat a bit and used the football markings again at the 38yd line. This happens to be the back foot of players (2) (3) (4). So although in the initial view it looked like (4) was in an offside position with the line drawn, now it's much closer. Because (4) never becomes involved in play we'll remove her from our offside discussion here.

Now wait a second, Dan, you used the back foot. -Why?- Well in this case we need an equal point of measure. We know the turf is flat, so we're not incorporating anything for height, this makes it equal for purposes of this measure.

We measure the offside line from the location of the players body that COULD play the ball legally. This appears at this moment to be the forehead of attacking player (2) and the right shoulder of defending player (3).

Now, based on how players are standing it appears that there is a slight lean forward. So, if we were to imagine the players position (2) in a forward stride leaning towards goal and position (3) standing more upright with a narrower stride we see how tight of a decision this is.

This is why AR positioning is so critical. Having a square angle with play is necessary as a couple of feet will quickly throw off the ability to make tight decisions. Sometimes even when we glance at a photo or video what seems from one perspective may not be the same view that we have as the official on the match. 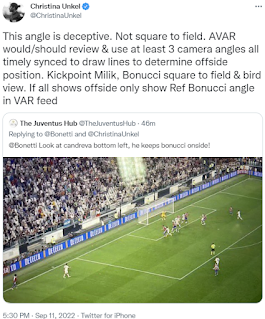 Christina Unkel had a much for succinct Tweet on the topic while I was authoring this post.

Credit and acknowledgement are due to Corey Rockwell and Jonathan Johnson who have both shared similar examples in the past and helped to educate me using examples like this.

Popular posts from this blog

February 16, 2022
Sisu Soccer Coaching provides goalkeeper coaching in Cedar Rapids, Iowa. The position of soccer goalkeeper is one of the most under-coached and least understood positions in soccer. We’re looking to change that in our community!  There are not many training opportunities outside of club environments, specialized camps and clinics, or private training. For goalkeepers who are developing, do not have a dedicated goalkeeper coach already, or who only play high school soccer this creates a challenge. Our pricing model is simple: Group Lessons $10 Individual Lessons $20 If you cannot afford to pay for lessons, that's no problem. The Core Commitment: Provide affordable low-cost, group and individualized soccer goalkeeper coaching. Ensure that any athlete wanting to develop as a goalkeeper has access to quality training, regardless of ability to pay. Develop skills such as confidence, tenacity, grit, and leadership which will pay dividends well beyond participation in sport. Create a cont
Read more

As a dad of a goalkeeper, a goalkeeper (and team) coach, and as a referee instructor I have a unique perspective of seeing things through multiple lenses. Being in a smaller community many recognize me around the field as someone who wears all three hats at various times. One of the greatest things I’ve learned over the past years is which ‘hat’ to wear, and when. I’ve also found that when wearing the ‘dad hat’ if I so much as take a deep breath or a sigh when an official makes a decision a parent sitting to my right or left picks up on that and I need to be mindful of those non-verbal moments and think tactfully when others ask me about a call. Recently I had a coach approach me about high school soccer officiating with a question about goalkeepers, about a week later, a parent approached me with a similar question, so I thought I’d share my perspective. Again, take it as a grain of salt, as someone who wears three hats – and not an official position of any of the organizations I offi
Read more

February 17, 2022
One of the amazing things in Anna's development as a GK is that she has had an opportunity to work with a number of different goalkeeper coaches. Some of these are professionally trained and developed coaches, whereas others are players who have passion for the game and are excited to share their knowledge. As you start to study goalkeeping it's quick to notice some things that are pretty common. An example is the set position, or the goalkeepers stance. We almost always see a similar bent knees, shoulders pulled back, equal balanced feet with heels slightly raised. But, now let's look closer. One goalkeeper will have a lean more forward than another. One prefers hands up with palms facing outward, while the other might have thumbs upright but hands in a blade type shape, as if they were preparing to shake someones hands. What's super is that goalkeepers can take each of these approaches in and determine what works best for them. There are a few things that I hold dear
Read more